During the week before race day, the weather was pretty bad in the Channel. Strong winds, high waves and strong currents. Pascal's original swim date was scheduled for Tuesday 5 July 2011, postponed to Thursday 7 July 2011 and finally to Sunday 10 July 2011.

The initial idea was that Pascal would be accompanied on the boat by a support crew of about 5. Because of change in date everybody except for Pascal's girlfriend Floortje cancelled.

On Saturday 9 July in the afternoon the pilot of the boat was confident enough for an attempt the following morning. This was the next to last opportunity for a swim.

After a short sleep, Pascal en Floortje arrived in the harbor of Folkestone at about 4.30am in the morning. Clear sky, no wind at all and pretty warm, such a difference compared to earlier that week. 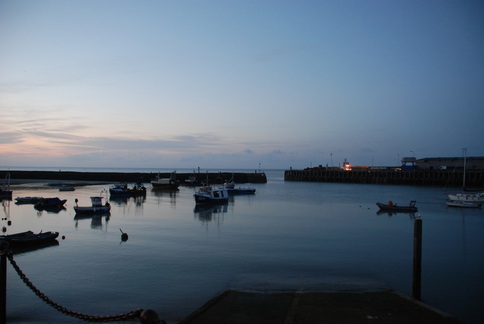 Folkestone harbor 10 July 2011
A list of what was brought on the boat for the swim:
Pascal did not use Channel Grease for the swim, only Vaseline to protect against chaffing in the neck and armpits. Water temperature was about 16 degrees Celsius and although quite cold, covering yourself in Channel Grease is argued not to help with keeping you warm after a couple of hours. It's a pain to get on/off, it creates drag in the water and adds weight. It is a personal preference to use it or not.

At around 5am Pascal was taken in a small rowing boat to the beach of Dover, very close to where the Channel Tunnel starts/ends. After having taken in the scenery for a minute, he started of his journey to France from dry land.

The first couple of hours were uneventful; 45mins of swimming followed by a 10-15sec feed/drink stop.
About half way across the Channel, motivation was very low. Pascal had been swimming for a little bit over 6hrs and boredom and fatigue were taking its toll. At that moment, Pascal got stung by a jelly fish on his neck and shoulders. Luckily the pain wasn't too bad and a large cocktail of Paracetamol and Ibuprofen quickly helped.
The adrenaline rush and anger gave Pascal a much needed boost to continue his swim.
The last couple of hours were very slow and annoying, basically swimming against the current, about 2 kilometres away from the French coast and not seeming to be moving at all.
After 13hrs of swimming, Pascal could finally start the last stretch to France, which he reached 13hrs25mins after having left England.
Channel, swim, Channelswim, kanaalzwemmen, Pascal Vernaeve, long distance swimming, swimming, open water swimming, openwater swimming, kanaalovertocht, kanaal, zwemmen, lange afstand, kanaal zwemmen, Pascal, Vernaeve, zwemmen, channel swim, openwater zwemmen, openwaterzwemmen, uitdaging, zwemmen van Dover naar Calais, Wissant, Folkestone, Calais, Dover, lange afstand zwemmen, trainingschema, long distance swimming